It appears the Wendy's on East Walnut will move into a newer building going up just west of the currently location, on the spot where Taco Bell used to stand.  The current building, while still open for business, has a "For  Sale" sign on it, with one of the selling points sales of $1.5+ million annually.

In the late 90s, that stretch of East Walnut had the second largest concentration of fast food restaurants in Carbondale, with Taco Bell, Popeye's , Wendy's and one or two others there.  Now, all, with the exception of Wendy's, have either closed or migrated further east to the Main/Giant City Road area.
Posted by Castle Perilous Games at 1:02 PM 5 comments:

Spoke with Kevin Baity again this afternoon.  The city was not involved in the purchase or foreclosure of the Stadium Grille building, had no input on the asking or selling price of the building, and has no idea what the selling price is.  The city and the Greater Egypt Regional Planning and Development Commission do have a combined lien on the contents of the building as the loan provided in part by the city was applied to the Grille's contents.  The amount the two organizations will settle the loan for with the new buyer  is currently under discussion and will likely be announced next Tuesday.
Posted by Castle Perilous Games at 9:29 PM No comments:

According to a discussion with city manager Kevin Baity yesterday, the city's asking price for the Stadium Grille building was $1.5 million, though another email I received says $1.6 million.  I have no idea what the actual sale price of the building was, just that it was somewhat less then the asking price. A commenter on yesterday's post puts it at around $900,000, which, if correct, means the city took a substantial loss to unload the building.
Posted by Castle Perilous Games at 1:02 PM No comments:

Not sure how I feel about this.  Specifically this part:

Kevin Baity, city manager, said the city staff will talk with Park Ridge Midwest Realty, a contractor, about using and improving the Stadium Grille property for use by Bandana’s Bar-B-Q restaurant. If the council approves the contract, Park Ridge Midwest Realty would purchase the property from First Southern Bank for $330,662 and make upgrades to the building. The city would then reimburse the contractor annually until either the $330,662 is paid off or the Tax Increment Financing District No. 1 expires.

Updated to clarify how the TIF district works (i.e. the city is not reimbursing the purchaser for the purchase of the property. The original DE story is awkwardly worded):

If I understand how the TIF process works, the tax base at the time of purchase remains the same and is used for calculation fo taxes due to other taxing bodies for the duration of the TIF district. However, improvements in the property would increase the calculated property tax.  The difference between the base property tax and the increased property tax goes into the Special Tax Increment Allocation Fund, which is not available to other taxing bodies and may only be used for investment in the area covered by the TIF.  In many cases, this includes reimbursing, over time, the investor in the property for the improvements made, but not the cost of the original purchase of the property.

The purpose of the TIF is to:

be used for costs associated with the development or redevelopment of property within the TIF, allowing blighted, declining and underperforming areas to again become viable, and allowing these areas to compete with vacant land at the edge of urban areas.

which the Stadium Grille certainly qualifies as (not blighted or declining, but certainly underperforming).
Posted by Castle Perilous Games at 10:30 AM 4 comments: 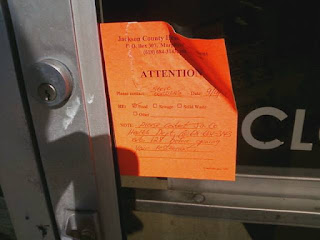 After opening with a lot of ballyhoo last fall, it appears Kelly's Irish Boxty House gave up the ghost over the summer. There's a sign in the window saying it would re-open June 11 after break, and this notice was posted by the Jackson County Health Department on Sept. 4th, telling the owner not to reopen without contacting the Health Department regarding food.
Posted by Castle Perilous Games at 7:00 AM 3 comments:

Which I am certain it is quite an honor for her to get named to this panel, for both her and the university, I have to wonder about the demands upon her time.  The panel will meet "several times" which will necessitate travel away from the University and by default, a lessening of her focus upon the university's problems.  As far as I know, the university still hasn't figured out its rebranding yet and the focus should remain on that until it is.

However, she is a member of the NCAA Board, so I imagine it is difficult to turn down the position when asked to serve.
Posted by Castle Perilous Games at 1:06 PM No comments:

Looks as if the police had to break up a fight between at least three women early last Saturday morning on West Mill, right across from campus.  It also looks as if none of the women arrested were actually residents of the area where the fight took place, though the gentleman arrested for damage to property likely was.  My guess, alcohol was involved.
Posted by Castle Perilous Games at 11:00 AM No comments:

As the Southern reports, parking fines will increase from $3 to $7 if paid within 2 days, $10 if paid within 3-12 days and $12 after that.  The fines have stayed the same since 1999 while costs to maintain the parking lots have increased.  All of the funds for maintaining the lots come from metered charges and parking fines. All upkeep expenses comes from the parking fund, none from the general fund.  It is easy enough to avoid a parking fine, don't overstay your time.  It is harder to avoid the meters themselves.

I have heard people argue that we should get rid of the parking meters, as this would help downtown businesses by allowing customers to shop longer without worrying about a fine.  Good enough, but then, where does the money come from to maintain the parking lots?  The city's general fund is stressed enough as it is, funneling money from it to the parking fund means other expenses and projects would have to get cut or reduced.

It would be possible to eliminate the meters and maintain the parking lots, but only if the sales taxes generated from the area increase by an amount sufficient to cover the amount diverted from the general to the parking fund. So far, I know of no research indicating that would happen.

Posted by Castle Perilous Games at 1:38 PM No comments:

Three of Carbondale's finest citizens stole property from someone earlier this month and on Sept. 2, used a stolen credit card to purchase items from several local retailers.  The C'dale Police have a photo posted here and request you contact them if you recognize them.
Posted by Castle Perilous Games at 10:24 PM No comments:

The DE has a pretty good article on the party image, or lack thereof, at SIUC, and how the change in image at the school never got replaced by another image.  Even the current rebranding pushed by Chancellor Cheng doesn't appear to develop a strong brand for the university.  SIUC is not a consistently top-performing sports school but most of the new banners around campus show students participating in sports.

Why not focus on the university's top ranked debate team?  What about its world class auto tech and aviation technology programs?  Or its mass communication school?   Granted, sports are an easy thing to look at and dramatize, but its the university's programs that will bring students, not its sports teams.
Posted by Castle Perilous Games at 7:04 AM 3 comments:

City Council meets tomorrow at 7 p.m.  Among the items on the agenda are a vote on the mayor's proposal to award $90,000 over the next three from the hotel/motel tax to the Carbondale Park District to help fund the proposed aquatics park.  The Carbondale Convention and Tourism Bureau voted last week to support the re-allocation of the funding.

Also of importance on the agenda, another look at raising parking fines, which have stayed at the same level since 1999 and are lower than comparable municipalities.   Some revision to senior parking permits is proposed as staff has seen senior permits on cars parked long term in the already congested Amtrak parking lot, as well as appearing on multiple cars.

There have been some complaints raised about raising the parking fines, that doing so would hurt those who can least afford it. If you cannot afford the parking fine, there is an easy way to avoid it.  Just don't break the parking regulation and, presto, no ticket.
Posted by Castle Perilous Games at 7:44 AM No comments:

In case you missed Chancellor Cheng's State of the University address, here it is, courtesy of a reader of the blog.  Given the state of the university, there's not much in the way of specifics in it.
Posted by Castle Perilous Games at 7:40 AM No comments:

As has been all over the local news, SIUC's fall enrollment is down again, this time by 970 student, roughly a 5% drop from last fall.  This is a pretty sizable hit, too big to get classified as just a variation from the mean.   Administrators blamed outside factors including:

amount of financial aid available to students, smaller graduating high school classes and drops in enrollment at local community colleges, from which a number of students transfer to SIU.

in other words, everything except the actions of the university.
Posted by Castle Perilous Games at 7:08 PM 3 comments:

In case you were planning to attend the Planning Commission meeting tonight, it's been cancelled.
Posted by Castle Perilous Games at 2:25 PM No comments: 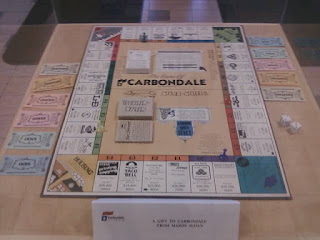 A copy of The Game of Carbondale, circa 1980 on display in the Civic Center.  From looking at the game, it looks like a fund-raising effort by the Carbondale JayCees.  Play is similar to Monopoly with spaces on the board sold to local businesses, who were then given copies to sell to try to recoup the money they spent on the space. On the board, but no longer in business:  Booby's, Perfectly Clear Printing, Piggy's Gourmet, Jake's Tire, Burt's Sandwich Shop, Longbranch Clothing.  On the board and still in business: State  Farm Insurance, Arnold's Market, Taco Bell, B&A Travel Agency, Pinch Penny Pub, Old Town Liquors, Diederich Insurance, J. C. Penny's. Still in business under another name:  The Waterbed Shoppe (now known as Furniture King).  Some other business on there as well, but don't have the names in my notes.

I remember seeing a copy of this in the window of the Book Depot (gone for some 15 years, used to be located behind Phoenix Cycles) in the early 90s. Stop by and see how many of the places on the board you remember.

Posted by Castle Perilous Games at 9:48 PM No comments: