SIUC's USG apparently fairly quietly impeached its president earlier this month. In a case of he said, she said, the impeached president says it was the university's doing and related to his company One Race. The newly installed president says he was removed for not attending meetings and failing to maintain office hours. Looking at the minutes of meetings for fall semester, I don't see any indications that he had missed any meetings, though.
Posted by Castle Perilous Games at 10:23 PM No comments: Links to this post

I see construction on the new Holiday Inn in Murphysboro at the intersection of 13 and 127 should start this summer. Given the speed at which Carbondale's Hilton has gotten constructed, maybe they will get finished at the same time.

I do wonder if there is enough demand for a second motel in Murphysboro. We could use one or two more in Carbondale, as the lack of lodging space has proven a major obstacle in recruiting conferences and sporting events to come here. Last time I checked, the city had roughly 500 rooms available, not counting AirB&B and similar lodging, for people coming in for a high school sports tournament or professional conference to rent. the lack of lodging for attendees at large events is  a major reason Carbondale does not attract large conferences and sports tournaments. We have quality facilities to host them but not enough places for them to stay.
Posted by Castle Perilous Games at 10:33 AM No comments: Links to this post

One thing I found interesting at last week's meeting with Rep. Bost was that, instead of a staff member, a representative of the US Chamber of Commerce accompanied him and took notes on topics and questions that came up. Granted the US Chamber of Commerce was a strong supporter of the tax cut but still strance to have a staffer from the organization there sittle next to the representative.
Posted by Castle Perilous Games at 8:11 AM No comments: Links to this post

It looks as if they city council will cut funding to various civic organizations by 5% or about 18,000 in total. I can see the point of view of the council members who said that the decline in student attendance at SIUC has affected city sales tax revenue and that the city needed to cut its own budgets and it needs to spread the cuts around so that no one takes a huge hit. I tend to agree with Councilman Jeff Dougherty who opined that the $18,000 was so comparatively small that the city should be able to come up with the money in order to keep supporting these organizations in their work at last year's funding. although no one likes to see their own funding cut, I would be if city staff looked ahrd, they could find $18,00 to trim from something in order to fully fund these organizations.
Posted by Castle Perilous Games at 9:00 PM No comments: Links to this post 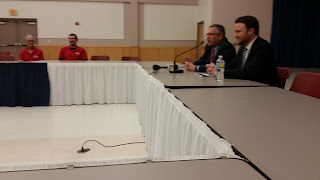 Sat in on the Mike Bost meeting discussing tax cuts/reform at the Civic Center this afternoon. Was rather surprised at how many of the businesses attending saying the cuts had helped their business, given that we really haven't seen them implemented yet. Infrastructure investment was a major topic as well. A couple of bankers asked about the tax benefits credit unions get compared to traditional banks and I asked if there were any plans to address the exemption online retailers get from collecting sales taxes if they did not have a physical location in the state. A couple of forlorn looking protesters stood outside the Civic Center as I left.
Posted by Castle Perilous Games at 3:19 PM No comments: Links to this post

Seeing  quite a few For Rent and For Sale signs in the Arbor District and areas close to S. Illinois and S. University, even in front of  houses that I have never seen a For Rent sign in front of before. There are a couple of houses on West Cherry right around the corner from Dairy Queen that I have never seen with a For Rent sign. Given the amount of new rental property that has come into Carbondale on the south side of town and at Evolve, coupled with the decline of the student population, I guess I should not be surprised that students are opting for new properties instead of 50+ year old houses into which the landlords put minimal money to maintain.
Posted by Castle Perilous Games at 6:32 PM No comments: Links to this post

Stephens Calls for Montemagno To Step Down

In case you missed the column in the Wednesday Carbondale Times, available for free in finer newspaper racks around town, Murphysboro mayor Will Stephens calls for Chancellor Carlos Montemagno to step down, citing a lack of confidence by members of the region in his ability to lead SIUC. The major reason Stephens cites is the recent incident of nepotism on campus, when jobs were made after Monetmagno's hiring for his daughter and son-in-law. Although Monetmagno has denied asking for the university to provide jobs for them, they did get jobs and not jobs that were advertised to the general public. Doubtful it will cause him to resign or for the BoD to call for his resignation, as Glenn Poshard committed "accidental plagiarism" a decade ago and remained in his position.
Posted by Castle Perilous Games at 7:23 PM No comments: Links to this post

International student attendance as a whole at SIUC  has declined over the past couple of decades. I remember hearing that, during, the 1990s, SIUC has the second largest number of Indian students in the US. In the last decade, the number of students from Saudi Arabia has dropped from just over 600 to under 200, with a number of those looking to transfer to other universities.

In case you are so inclined, here is the agenda for the Historic Park Advisory Committee Meeting tonight at the Civic Center at 6 p.m.

Posted by Castle Perilous Games at 12:51 PM No comments: Links to this post

I see the Board of Trustees approved a 2% tuition hike for SIUC as well as increasing costs for residence halls, on-campus housing and meal plans. Funny, when I am losing customers, raising my prices is not the first thing that comes to mind.
Posted by Castle Perilous Games at 9:58 AM 1 comment: Links to this post

Email ThisBlogThis!Share to TwitterShare to FacebookShare to Pinterest
Labels: SIUC

According to yesterday's Carbondale Times, Hundley House will be sold to the highest bidder at a foreclosure sale on February 26. Current asking price is $327,900
Posted by Castle Perilous Games at 1:01 PM No comments: Links to this post

Free showing of Before the Flood tonight in Morris Library:

I hope you will join us this Thursday, 2/8/18, the two-part Shawnee Sierra Club program: --The 7 pm screening of climate activist and actor Leonardo DiCaprio's film "Before the Flood" in SIU Morris Library's Guyon AuditoriumAND --The 6:15 pm tabling of student environmental and social justice groups starting in the Rotunda (just outside the auditorium). BOTH PARTS OF THIS PROGRAM ARE FREE AND OPEN TO THE PUBLIC. REFRESHMENTS WILL BE SERVED.In "Before the Flood," a 2016 film by Academy Award-winning director Fisher Stevens, actor Leonardo DiCaprio travels to five continents to talk with climate scientists and political leaders and give us an up-close understanding of climate change and the activism needed to protect our Planet. In DiCaprio's own words: "This documentary shows how interconnected the fate of all humanity is-but also the power we all possess as individuals to build a better future for our planet."During the pre-screening portion of this event, you will have a chance to meet environmental student leaders and find out about activities and projects of five student groups: the Geography Club; SENSE (Students Embracing Nature, Sustainability & the Environment); the Society of American Foresters; Define American; and Green Fund Campus Lake Eco-Recreation Projects Group.We very much hope to see you at this important event. If you have any questions, please don't hesitate to let me know.Jane Cogie, Chair & Membership ChairShawnee Group of the Sierra Club
Posted by Castle Perilous Games at 6:00 AM No comments: Links to this post

Carbondale Police Department has sent out a survey regarding satisfaction with the department:


The City of Carbondale Police Department is requesting your assistance.  In an effort to provide the best police service possible, we would like you to rate your level of satisfaction regarding interactions you may have had with a member of the police department. We would also like for you to share with us your level of safety and other general concerns regarding your neighborhood. By completing this short survey, “It is my hope, you will help us improve the quality of our service and find more ways to continue to place a higher emphasis on improving the safety of our residential neighborhoods,” said Police Chief Jeff Grubbs.
To complete the survey, please visit, https://www.surveymonkey.com/r/DWHY65L
Jeffrey M. Grubbs
Chief of Police
City of Carbondale Police Department
501 South Washington Street
Carbondale, Illinois 62901
(618) 457-3200 ext. 423
SIU ’91, MPA ’00 – FBI National Academy 235th Session
Posted by Castle Perilous Games at 10:48 AM No comments: Links to this post

From an email I received and posted with permission:

This isn't just at SIUC, it is a statewide problem. The problem is pretty dramatic at SIUC though and it affects those of us who live here as SIUC is the primary economic engine of the city. wE have seen an estimated $1.3 billion loss to southern Illinois as a result of the declines at SIUC
Posted by Castle Perilous Games at 10:58 AM No comments: Links to this post

The city has announced the Civic Center will remain open from 8 p.m. to 8 a.m. Friday and Saturday nights to provide shelter from the below zero overnight temperatures for those who have no place to go to get warm.
Posted by Castle Perilous Games at 10:27 AM No comments: Links to this post

Caught on WSIL this morning that Spring attendance at SIUC will come in at 13,300, down another 8% from Spring 2017 and down over 10,000 students from its peak back in 1990. Going to take quite a bit of work to get university numbers back to that level and I still haven't heard any good explanations as to how the proposed reorganization will accomplish this. Re-organizations generally work to make operations run more smoothly. That, as far as I can tell, is not the problem here, except maybe in recruiting. the university appears to run fairly well, it is just not attracting students at a level to replace those that graduate.
Posted by Castle Perilous Games at 7:46 AM 2 comments: Links to this post