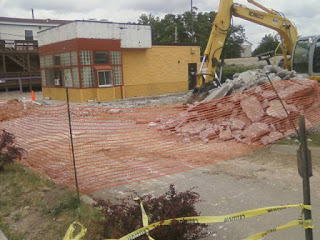 The Jewel of India drive through/walkup at the south end of Illinois is undergoing major renovations, involving earthmoving equipment.  From what I have heard, the plan is to expand the restaurant towards the south, doubling its size with inside seating.  They will eliminate the drive through, making it a proper sit down restaurant, then close the Jewel of India location two blocks north at the corner of College and Illinois.
Posted by Castle Perilous Games at 9:00 AM 2 comments: Links to this post

Leave town for a week and come back to a longtime Carbondale institution announcing its closure.According to a post on their Facebook Page, Twothirteen, formerly know as Traz, formerly known as Club Alcatraz and many other names over the years, will close in the near future after a 23 year run, shutting donw Carbondale's premier venue for drag shows.
Posted by Castle Perilous Games at 11:10 AM 1 comment: Links to this post

On the road for the next week so posts will be sporadic, however I did want to address this article in the southern regarding city representation on the CCTB. Although I sit on the CCTB, I am speaking for myself whey I say that is a good idea. Though boards members are named by the mayor, ANC councilman Chris's Wissmann has served as a council representative since the reformation of the board, I think having a council member officially as a board member is a good idea. Th
Posted by Castle Perilous Games at 4:29 PM No comments: Links to this post

City Council will consider rescinding ordinances closing the bars on the south end of Illinois at its June 11th  meeting. As long time residents of C'dale know, since 200,bars in that area have been required to close the weekend before Halloween as a result of rioting and property damage in the area. At one time, bars and liquor stores all along S. Illinois were required to close but that has generally loosened over the years, to the point that only Hangar 9, Sidetracks and Gatsbys are still affected.

Those arguing for the rescission of the ordinance point out that the students who participated in the rioting of the 1990 have long left Carbondale and those attending currently have no personal experience with the event, though the local television stations do manage to rollout video of the riots every time the event comes up for discussion.
Posted by Castle Perilous Games at 12:48 PM No comments: Links to this post

Apparently the state is slowly moving ahead with proposals to start fracking for shale oil in southern Illinois. This part of the proposal is what caught my eye:

To address concerns that the drilling should bring jobs to Illinois, the proposal now includes a “local workforce tax rate reduction” incentive, said state Reps. David Reis, R-Willow Hill, and Mike Bost, R-Murphysboro.
Drilling operators, who will pay Illinois a tax on the amount of oil or gas produced, will be able to reduce what they pay if at least 50 percent “of the workforce hours on the well site are performed by Illinois construction workers being paid wages equal to or exceeding the general prevailing rate.”

In general, any time companies get a tax refund or reduction for the purpose of creating jobs, it is an act of faith that cutting or reducing taxes will create more jobs.  I haven't seen a great increase in jobs since the SIUC Stadium and Arena were rebuild and remodeled.  The state of Maine is looking into what, if any, benefit in terms of jobs come from tax reductions as it hasn't seen them either.

Posted by Castle Perilous Games at 9:21 AM No comments: Links to this post 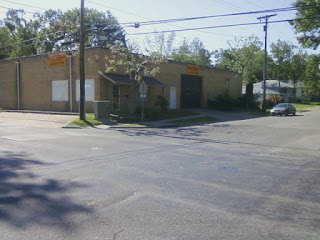 Oakland Avenue Auto Repair remains closed over a week after the city presented the owner of the property and the leesee with a cease and desist order for operating in a residential area without a special use permit.  I had thought the owner would have sought relief from the court allowing it to remain open while the facility remains in dispute but I guess not.

I hate seeing a thriving business shut down, and Oakland Avenue always appeared full, but I can also understand the local residents not wanting a garage opening up next door, especially when they had purchased the property with the understanding that only single family residences would be allowed in the area.  Of course, there is a fairly good sized apartment complex located right across the street from Oakland Avenue Auto Service and the National Guard Armory complex, recently acquired by Alpha Rentals, sits catty-cornered to it, while the old High School buildings remain just south, with the Armory and school buildings both part of one of the recently created TIF districts, indicating the city plans to encourage development in the area.
Posted by Castle Perilous Games at 3:07 PM No comments: Links to this post

Every wonder why we have so many laws and regulations?  This is why.  What sort of idiot would even think of using a drone to harass someone out in the field?  Unfortunately, there is no law against doing so, ergo people are going to do it, meaning we have to pass a law to stop them, rather than relying on their uncommon sense.
Posted by Castle Perilous Games at 9:30 PM 4 comments: Links to this post

Would really like to see something like this in the downtown area as it would certainly bring people, especially families into the area during the daytime, which in turn would generate sales for the assorted restaurants and markets.  Unfortunately, putting it near the square means you have ABC Liquor Mart looming in the background as well as aggressive panhandlers and loafers hanging out on the Town Square Pavilion.  If I recall correctly, a child care center on Jackson used to bring kids over for the Brown Bag Concerts  but stopped when one of the Pavilion hangers-on started patting the kids on the head.  No parent would want to put up with that.

The Friday Night Fairs don't have any problems and are kid friendly, but they are also well supervised and take place in the evening on the Pavilion, which means the hangers on have to vacate.  However, I don't see that happening without drastically stepped up police presence in the area.  I have already been hit up by panhandlers twice in the past week.
Posted by Castle Perilous Games at 2:28 PM 1 comment: Links to this post

Turned on the city council meeting about 15 minutes late:

7:18  Phi Rho Eta Fraternity requesting a Special Use permit to host a carnival in the University Mall parking lot.  some questions regarding how much insurance the Fraternity had for the event ($1 million).  After that, council approved unanimously.

7:22 Resolutions commending retiring city employees, Earl Mitchell and Donald Priddy for service to the city upon their retirement.

7:35  Very long commendations of Mitchell and Priddy.  Now honorarily re-naming E. Jackson as Corene McDaniel Court and Hospital Drive as Chris Wissmann Way.  Lance Jack  Has now brought a motion up requesting that council members be listed on resolutions in order of their years of service.  No-one else seems to know why he is bringing this up now.

7:40  Apparently Jack wants to make sure his two separate terms as a councilman are counted in total for determining order of listing of council members.  Apparently he feels slighted because his total years of service were not counted when determining the order listed on the resolution.  Raining on McDaniels and Wissmann's parades to bring this up now.

7:46  City Attorney is now  smacking Councilman Jack for making a motion now when it should properly be put on the city council agenda ahead of time so the community is aware of it.

7:49  Jack apparently will bring this up later and has moved that E. Jackson be honorarily renamed Corene McDaniel Court .  Approved unanimously.

7:50  Lance Jack now bringing up his complaint again regards   Apparently, he feels this is a personal slight against him from Mayor Fritzler who responded that the order had been set by former Mayor Brad Cole.  Resolution changing the name of Hospital Drive to Chriss Wissmann Way (honorarily) passes unanimously.

7:55  Council voting to approve TIF payments for remodeling of the old Mary Lou's building on S. Illinois.  Some questions from the audience about whether this is a good use of tax dollars.

8:04  Councilman Jack is now lecturing the gentleman who just spoke questioning the TIF District funding, saying that the gentleman (Williams) should read up on the purpose of the TIF District and that one of council's purposes is to help revitalize blighted area.  Now the mayor is weighing it, saying that TIF Districts have been abused but the city is making minimal use of them, referring to downtown as blighted.  Another man is now questioning referring to the downtown as blighted.  As an aside, a big problem evidenced here is that how TIF Districts work was not clearly explained.  All people hear is that the owner of the property will get $250,000 back without really understanding from where than $250,000 comes.

8:34  Eric Wilson (?) up again speaking about revenue loss in the TIF and quasi relating it to the tax assessment appeals proposal.

8:37  Question from citizen about groundbreaking at Liberty Village today and a solar plant at the old Koppers plant.  Apparently old Saturn showroom next to Buffalo Wild Wings has sold and will be remodeled into a complex of doctors' offices.
8:42  During council comments, Jack is again questioning what council procedures need advance notice and what do not. Oh, Bradshaw and Harvey both thanked people for voting for them.

8:46 Meeting adjourned to a reception for the new council members.
Posted by Castle Perilous Games at 7:22 PM No comments: Links to this post

The Oakland Avenue Auto Shop, which has operated in an area zoned for residential use without a special use permit for the year, was ordered closed last Friday, due to the lack of said permit.  I rather thought the owners would contact a judge about getting a stay of the order, but nope.  The business has been closed for the past couple of days.
Posted by Castle Perilous Games at 10:25 AM No comments: Links to this post

Apparently the plan is to fence off the area come July 1, with a projected re-opening of the store, with up to 5 stories of residential living on top, come August 1 of 2014.  No word yet on where 710 Bookstore will move to in the meantime.  My guess, and it is only a guess, would be the still empty Saluki Bookstore building on East Grand.  Still close to campus and already laid out for use as a bookstore, though it has nowise the space that 710 does.
Posted by Castle Perilous Games at 11:37 AM No comments: Links to this post

The State Finance loan office at 126 S. Illinois shut its doors at the end of April.  Apparently its lease ended on May 1 and they opted not to renew so the landlord required them to vacate and empty the premises immediately.  Good location for a business wanting to take advantage of foot traffic around City Hall and the Civic Center, especially those heading to Thai Taste and Cristaudo's for lunch.
Posted by Castle Perilous Games at 8:52 AM 2 comments: Links to this post

Certain am not going to count the area covered by the STAR bonds out.  From what I have heard, second hand, Disney (yes that Disney) has a substantial investment in property to the north of Marion. Based on Disney's track record of property investments, it is highly unlikely that the company would invest in anything that it was not certain would bring about substantial returns over the long term.  Disney Marion, anyone?
Posted by Castle Perilous Games at 2:21 PM 4 comments: Links to this post